Recently we, the people of the internet, all learned that Beyoncé started following a plant-based diet. When I saw she had a taco recipe I knew I’d have to try it, and I have to say, Beyoncé’s life and mine really couldn’t be more different. She is a multi-platinum selling artist who has also been in huge movies, she married Jay Z and has two kids, and she is one of the most powerful women in the world. I, on the other hand, spend my days looking at clouds, cuddling with dogs, and probably have a negative net worth. Despite our differences, Beyoncé and I seemed to have the most important thing in common: tacos.

The recipe seemed easy enough and I headed to the store to get walnuts and coconut amino acids, the latter of which I’d never heard of. I figured if Beyoncé was using them instead of soy sauce there was probably a damn good reason even if they did cost $7.

After that I stared at the bulk bin wondering if should save some money by getting conventional walnuts. But then the words popped into my head. 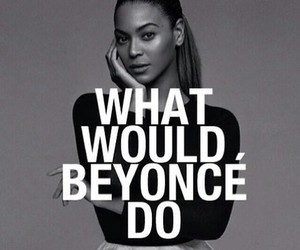 I went home and started processing the walnuts with the coconut aminos, cumin, and corriander and I realized I was all out of balsamic vinegar. And I was planning to use some spinach in the tacos instead of the romaine that was called for until I realized the romaine wasn’t in the taco but holding it together. Baby spinach was not going to work! Even if I tried it in an attempt to make baby tacos, I knew, in my heart, I’d end up with a salad.

Off to my local HEB I went where I was stymied by the lack of balsamic vinegar. I found a million different kinds of hot sauce but balsamic was nowhere to be found. Finally, I looked in the salad dressings and found a balsamic dressing called “Sass” and I was sure that Beyoncé was helping me, but then I looked at the ingredients and realized it would not do.

And so to another store I traveled on a quest for balsamic vinegar. At this point I was getting pretty hungry and when I got home I was glad to see the rest of the recipe was really easy. Process the walnut meat, put it in romaine, and top with cherry tomatoes, avocado, and lime. I even sprinkled it with a bit of black lava salt assuming that Beyoncé only uses artisanal salt and snapped a pic. 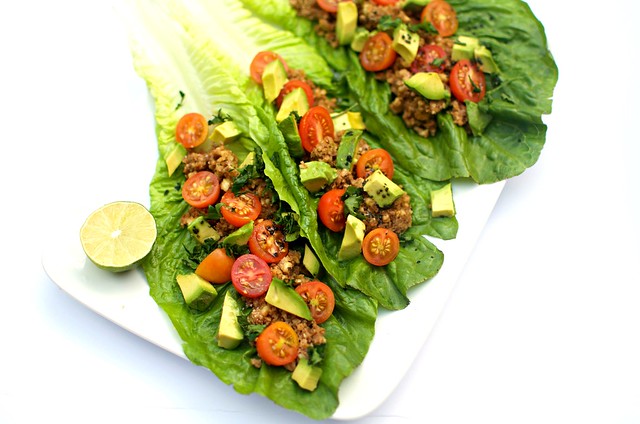 I was a bit nervous about eating these because they really didn’t look like any sort of taco I’m used to. Plus, after all that grocery shopping I was really hungry. But they were actually kind of good? And three was more than enough. I actually felt really sick afterwards and wanted a cookie, but otherwise, if you are looking to transition to a taco based diet from a raw food diet, this might be the taco that you are looking for.

Wash and drain the lettuce and tomatoes and set aside. Combine all taco meat ingredients in a food processor. Pulse several times until crumbly, making sure not to over blend. Spread the walnut taco “meat” on the romaine leaves in 4 equal servings. Slice the avocados in half and remove the pits. Peel away the skin and dice into small, even pieces. Garnish the walnut taco meat with the vegetables, salt, pepper, and lime juice